Most large retailers are doing it. Two-thirds of the top 50 retail corporations on the NRF list — and eight of the top 10 — used content marketing in some form.
Other Walmart Ideas include:
First, there’s Amazon Video. While this is a paid service and part of a Prime membership, it is unquestionably content that attracts folks to Amazon. The same, by the way, might be said about Amazon Music.
Let’s face it, Walmart probably doesn’t need content marketing to attract shoppers. The Walmart brand is widely recognized.
A company with multiple brands — e.g., Albertsons, Ahold Delhaize — I counted only once so long as any of those brands had a content marketing program. Gap and Old Navy are Gap Inc. brands, and neither had an apparent content marketing program. But Banana Republic, also a Gap Inc. brand, had a blog called The Journal. So Gap Inc. counted.
So attracting customers may not be Walmart’s content marketing priority. But the company does use content to engage customers. Its Ideas page is full of how-to articles related to the products Walmart sells.
Some 33 of the 50 largest U.S. retail companies use content marketing. And 22 of those are doing it fairly well.
You will also find live streams on Amazon that allow sellers and other creators to help shoppers discover products or complete tasks. Examples include cooking shows that demonstrate recipes and feature the products used. Many of the programs are similar to the Home Shopping Network or QVC. Others resemble personal YouTube channels or even the Food Network.

I reviewed the websites and social media channels of the 50 largest U.S. retailers, according to the National Retail Federation, to learn which ones used content marketing.
Most of the poor performers appeared sporadic with topics and schedules, lacked internal linking, and used little content promotion.
Amazon Live programs are similar to Home Shopping Network, QVC, personal YouTube channels, and even the Food Network. 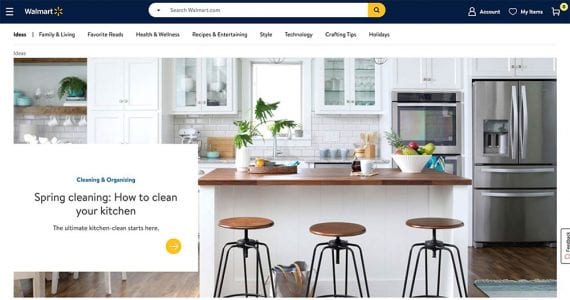 Imagine being a retail business with 0 billion in annual revenue and having a content marketing program that is not as good as many personal blogs.

Amazon also publishes regional blogs for India, Australia, Japan, Germany, Poland, the European Union, and others.
Many consumers and investors are interested in what Amazon is doing. A well-written corporate blog makes sense in context. You might think of Amazon as an ecommerce giant, a streaming movie and television service, or maybe a cloud-based infrastructure platform. But the retailer that sells everything from A to Z with a smile (as depicted in its logo) also uses content marketing in several forms.

“Your kitchen is probably one of the most-used rooms in your home. It’s also where your food is stored, prepared, and cooked daily, so keeping it clean is very important. Refresh this important room this spring with our kitchen cleaning checklist,” read the opening paragraph of a recent idea post titled “Spring Cleaning: How to Clean Your Kitchen.”

For example, at the end of January 2021, Walmart had 4,743 locations in the U.S., roughly 2,000 in Mexico, and many stores worldwide — such as China, the United Kingdom, Canada, Chile, Guatemala, many more.
Those categories have obvious topics to cover. Grocery stores can publish a never-ending list of recipes. Auto part stores can produce how-to articles and videos on tasks ranging from oil changes to replacing a bearing assembly. Home improvement centers can produce lots of how-to content, too.

There is also Amazon Science, a microsite about Amazon’s “customer-obsessed science”; the Amazon Web Services blog, devoted to the company’s technology platforms and services; and several guides, including one about ecommerce.

Walmart’s Idea section had lots of useful how-to articles. The company also has its Walmart Museum site for the physical museum at 105 North Main Street, Bentonville, Arkansas. One might argue that operating a museum is an example of content marketing in the real world.
The smile in Amazon’s logo is an arrow pointing from A to Z.
Some products are better suited for content. With just one exception, grocery chains, auto parts stores, and home improvement centers were all using content marketing.

A simple count of whether businesses such as Walmart, Amazon, and The Kroger Company have a blog is, admittedly, not earth-shattering information. But it did affirm three of my observations.
How well retailers were using content marketing was even more subjective. To be counted, the company had to have either regularly updated content or a variety. In some cases, the well-done content took the form of YouTube channels or similar. Lowe’s, for example, has a fairly active ideas section on its site, 3.7 million followers on Pinterest, and a YouTube channel with more than 1 million subscribers. Thus Lowe’s makes effective use of content.
Next, Amazon has a corporate blog owing to its size and influence. Consider that The Wall Street Journal featured Amazon in seven articles from April 1 to April 6, 2021, and has otherwise mentioned Amazon thousands of times.

A day in the life of… Lars Lehne, Group CEO of Incubeta