Once the carbon dioxide is captured, heat is typically applied to release it from the solvent or sorbent. This regenerates the solvent or sorbent for another cycle of capture. The collected CO2 can be injected underground for permanent storage in certain geologic formations or used in various products and applications. Permanent storage results in the biggest climate benefit. Swiss company Climeworks and Canadian firm Carbon Engineering are leaders in the DAC market.
Businesses can make a positive contribution in several ways. An ecommerce company could minimize packaging materials, reducing its carbon footprint. Delivery companies can switch to electric vehicles.

In 2012 Microsoft implemented an internal tax on all its divisions to make them responsible for reducing carbon emissions. Microsoft recently doubled its internal carbon fee to per metric ton on all carbon emissions.
Wren is a subscription service that offsets an individual’s carbon footprint. When customers sign up, they share their transportation, diet, services, and energy usage, which Wren uses to calculate their carbon footprint. Then, customers pay a monthly fee averaging to offset what they emit. That money goes to one of three projects managed by established environmental organizations. While Wren targets individuals, not businesses, it provides a plan that allows businesses to offer Wren as an employee benefit.
Likewise, Pachama offers an API for businesses to incorporate carbon credits into the purchase of products and services. Pachama supports verified forest conservation and reforestation projects.
The company received proposals from 79 applicants for 189 projects in over 40 countries. Microsoft then purchased 1.3 million metric tons of carbon removal from 26 projects worldwide at an average price of per metric ton.
Most businesses that have committed to reducing carbon do so by purchasing carbon offset projects — carbon sinks.

Climate change is front and center in the news. How businesses can make a positive impact is not well understood. I’ll provide an overview in this post.

Direct air capture (DAC) is another method of taking carbon out of the environment. It uses chemical reactions to capture CO2. Air moves over these chemicals, which selectively react with and remove CO2, allowing the other components of air to pass through. These chemicals can take the form of liquid solvents or solid sorbents (materials that absorb gasses), which make up the two types of DAC systems in use today.
Luxury ecommerce merchant Farfetch intends to offset the carbon footprint of all its deliveries and returns as part of its Climate Conscious Delivery program. The company says 85 percent of its emissions are related to shipping and returns. Projects include planting and protecting forests in the U.S. and Brazil. Farfetch is also using more efficient packaging as well as shipping more products in bulk, lowering its carbon footprint. Pachama offers an API for businesses to incorporate carbon credits into the purchase of products and services.
Other companies that offer carbon plans to businesses and individuals include: 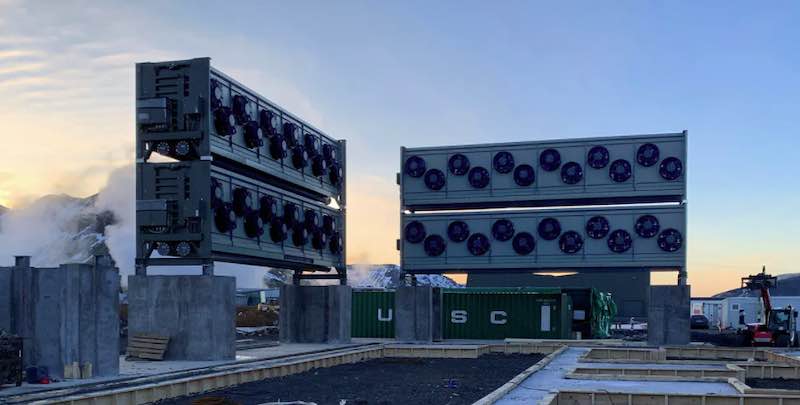 Carbon Checkout, another company, lets online merchants integrate a customer contribution, usually less than , into the checkout process via an API.
Microsoft’s goal is to be carbon negative by 2030 by reducing its carbon emissions by half. This will likely require Microsoft to procure millions of metric tons of carbon removal. In July 2020 Microsoft issued an RFP to procure in 2021 1 million metric tons of nature- and technology-based carbon removal.
In 2019 Etsy became the first global ecommerce company to offset 100 percent of its emissions from shipping. For every customer purchase, Etsy automatically purchases a verified offset.
Direct air capture, such as this example from Climeworks, takes carbon out of the environment using chemical reactions to capture CO2. Air moving over these chemicals removes CO2, allowing the other components of air to pass through. Image: Climeworks.
For merchants, Cloverly offers carbon-neutral shipping via an application programming interface that calculates and neutralizes carbon emissions on a per-transaction basis. It purchases carbon credits on behalf of companies or their customers. Using Cloverly, an ecommerce store can give its customers the option of making their deliveries carbon-neutral, usually for less than per transaction, by adding that amount to their shopping cart. Cloverly offers a plugin for BigCommerce, Magento, and Shopify stores. Merchants on other platforms can integrate via the API.