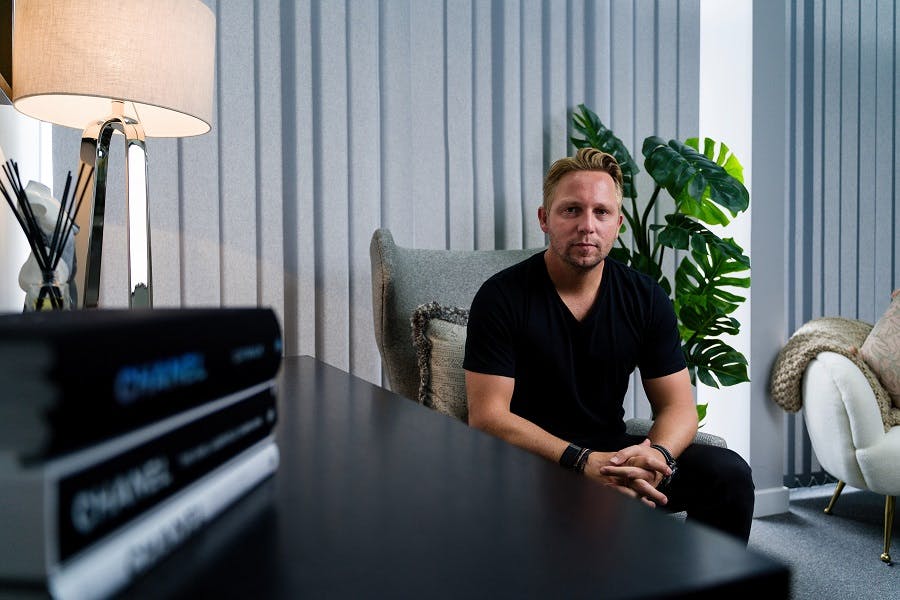 I spoke with Moutter, CEO of TMG, to learn more about the company’s end-to-end offering, as well as the predicted evolution of the ecommerce industry.
“I think there’s a common misconception… you get a brand or product and you want to launch an online store, so you get Shopify or WooCommerce and that’s all you need. Which is fine when you start, but actually to scale a business, you need many more things, you need to adopt operations, warehousing, logistics, and most importantly, technology.”
“I’ve always said to people that if ever on a Sunday night you are dreading coming into work on a Monday, I want you to leave, because it’s not the right job for you.”
“Outside of London it is quite rare,” he says. “You don’t get a lot of technology-driven businesses, so all the perks that we have – the nice culture and the freedom and shares in the business – is actually quite alien in this area. There’s always another big American-owned company in London that is going to pay you more money, meaning you don’t get a lot of loyalty down there, whereas up here people are very, very loyal.”

“Because actually, those that have innovated in the high street are doing well. So again, Next, putting coffee shops in stores so you can go in with your kid, grab a coffee and a panini, and pick up new school uniform while you’re there – these experiential environments that stores are creating is a real big thing.”
“Certainly, at the moment, as a consumer you are probably seeing that outdoor furniture is quite sparse, and when you do find it, it is extremely expensive. So, it’s had swings and roundabouts, but we’ve continued to grow since stores have re-opened.”
As with many online retailers, Moutter also explains how Covid hasn’t left the company entirely unscathed. “[High demand] was also mitigated by huge stock issues in the UK. And that was not just our industry, I’ve got friends who are in the fishing tackle industry who struggled to get stock. We actually found that 40 to 50% of our bestsellers were out of stock at one point, so there’s a lot of missed revenue there.”
But while innovation in ecommerce is accelerating, Moutter suggests that this will further highlight gaps in an industry where some retailers are struggling.
As well as speeding up distribution, TMG uses technology to automate processes, specifically in terms of ‘decision-making’ around weights, dimensions, and fragility – which automatically assigns a consignment to the correct carrier. In doing so. TMG has reduced goods-handling to three or four times, where as most goods are typically handled eight to 12 times. Consequently, Moutter says that TMG’s technology has resulted in reduced damage rates, whereby “for fragile items like mirrors, the industry average is 8%.” In contrast, he says, “ours is 1.2%.”
Anyone can have a go at setting up a Shopify store these days, but scaling a successful ecommerce business is another story – particularly in such a highly competitive market.
Spryker’s Alex Graf on successful B2B marketplaces: the common denominator is speed of adaption
For its clients, however, Moutter says that the platform’s agnostic nature means it can work for any sector. “So as long as it’s not FMCG or refrigerated goods or anything like that, we’re quite open. Two of the new clients we are bringing on this week are both gym-wear and gym equipment retailers,” he explains.

Challenges and opportunities in the last 18 months

“What we have also started seeing is groups of brands. Again, we have seen Next making a large investment in Reiss and putting them on their [Total] platform. Obviously, the Boohoo guys are very active in that consolidation play,” he says.
On the back of continued growth, TMG is expanding with a new office and distribution centre soon to open in the US. And while shipping issues due to Brexit have caused expansion in the EU to be put on pause for now, the European market is next on the agenda, as well as the UAE.
Currently, TMG is focusing, Moutter says, on “earlier stage pure play DTC [clients], so businesses that are just starting and need to adopt these tools and operations, and need the development support in order to be able to scale.”
TMG relies on the fast growth of clients, with the business earning money based on a revenue shared model. As such, says Moutter, “we are not reliant on the platform and the platform sales to prop up the business or anything like that. We are selecting people who don’t want to grow 10% a year, but who are fast growth and want to continue on that path.” Ultimately, he says, “the more they make, the more we make.”

On culture: “we’ve never actually had anybody leave”

Naturally, says Moutter, this means lots of hiring in on the horizon, with TMG’s UK team also set to move into a new head office “nine or ten times the size” of its current set-up. This naturally leads us on to the topic of culture, which Moutter says is an issue he is “particularly big on”, bolstered by the fact that no TMG employees have ever resigned.
In a year of unpredictability, TMG has seen steady growth, with reports suggesting that the business is due to reach £50m in turnover by 2022. This summer, the company secured £5m in seed funding, led by Fuel Ventures, has seen triple digit year-on-year growth and has built a team of 50 technicians and ecommerce experts at its HQ in Staffordshire.
First, he says, is the continuation of the big consolidation plays that are happening, both in terms of technology and brand.
“We’ve let people go, but we’ve never actually had anybody leave,” says Moutter. With a flat and fairly non-hierarchical culture, he puts this down to the company’s straight-talking but relaxed attitude to standard working policies. “We don’t have holiday allowances, it is unlimited holiday for our employees, so they can take as much as they like within reason,” Moutter explains. “We are quite upfront and bolshy about things, so we’ve got a sign on the wall in big letters that says: ‘We have one rule: don’t take the piss.’”
Ultimately, this is where TMG has seized an opportunity. “We have built technology around operations, logistics, and supply chain that didn’t really exist before. And creating a lot of automation in that space has resulted in… you buy a product from any of our stores and you get it within five working days no matter what it is,” explains Moutter.
With obvious passion for the technology that underpins (and drives) today’s ecommerce success stories, it is clear how Moutter has established TMG as a company to watch.

Retailers have to become technology companies

Moutter explains how, on average, most ecommerce stores require around 13 different pieces of separate technology. “So, what we have done is consolidate all of that,” he says. “It’s about unifying all of those different solutions that you need in order to scale an online store and make it a single proposition.”
Finally, however, Moutter does not believe that the high street is dead. Rather, he says, “I think innovation in retail is dead.”
In terms of category-focus, TMG plans to keep its own brand portfolio within homeware, capitalising on the wide-range of verticals within the market, as well as continued growth of the online Home & Garden category.
The Moot Group began in 2018 with the launch of the homeware ecommerce company Olivia’s. However, Moutter says that it was the process of scaling this brand that ultimately led to the creation of TMG’s BOLT platform, which offers end-to-end solutions to clients.
“Shopify benefits from having the app store, and you know there are businesses that have created billions in enterprise value just from being on the Shopify app store,” he says.
“There’s lots of ecommerce stores out there that are not actually ecommerce stores – what I mean by that is they are online retailers. And there is a very big difference between being an online retailer and a technology business. And the ones that are more online retailers are actually going to struggle – I think we will see the death of those guys.”
Moutter also suggests that the location of the business, which is currently in Staffordshire, makes a big difference to company culture – and the attitude of employees.
Moutter cites the automotive industry as further proof that technology integrated into retail environments can work – but only because the tech itself is at a point where it is good enough. Within ecommerce, he suggests, there are still a lot of areas (particularly within operations) that are extremely antiquated – where technology hasn’t been adopted at all.
Discussing current trends, Moutter says that the Covid pandemic has only served to accelerate what was already happening with consumers ever more willing to buy online.
This is partly why Nick Moutter founded The Moot Group – a Staffordshire based retail technology company that provides end-to-end ecommerce solutions for retailers (including logistics, automation, and marketing).
Secondly, “there’s lots of innovation in machine learning and AI and how that can create dynamic personalisation. A lot of the learnings we see from adtech and marketing technology are related to personalisation, and it is now pushing its way into ecommerce from a buyer perspective.”
“Let’s look at Kazoo, right? You would never have imagined, however many years ago, that people would purchase a car online without seeing it or touching it or test driving it. Now, people’s propensity to purchase online, and their buying decisions, and also their budgets…. the amount they are willing to spend online is increasing,” he suggests.
As clients are added, the TMG platform continues to evolve. Moutter comments that “One of the acquisitions we’re actually in the middle of at the moment is to further some of the functionality on the platform. When it comes to product listings and optimisation, there’s lots of AI out there now which can really increase those on-site conversion rates, so we’re looking to increase that level of functionality for both ourselves and our customers.”

When it comes to the evolution of ecommerce, Moutter predicts two things.