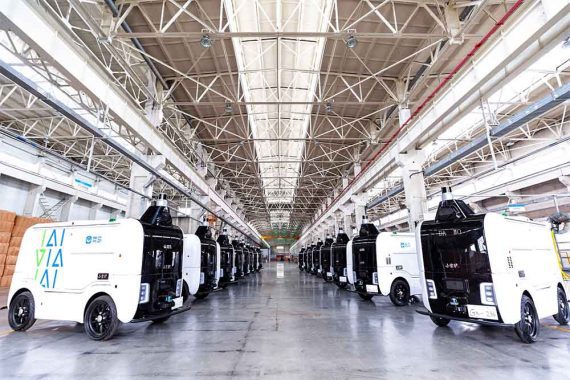 For example, Cainiao Smart Logistics Network Limited, an Alibaba subsidiary, uses its close integration with Chinese customs officials to clear orders for international shipping in an hour or less.
The further AliExpress, Tmall, and other Chinese ecommerce businesses expand, the more they compete with Western ecommerce powerhouses such as Amazon, Walmart, and Germany’s Otto Group.

It is unlikely that all of these bots will be successful. Regardless, our sidewalks and class G airspace could someday resemble a science fiction film with streams of buzzing and humming robots swarming to and fro.

Each of these will need to keep costs low along the entire supply chain. The global competition could pressure last-mile delivery, as massive ecommerce companies (and hundreds of regional and small businesses) all seek to offer free and fast shipping. Alibaba, Amazon, and the rest are presumably doing everything possible to reduce last-mile shipping costs.
This service, based out of Walmart’s 4,700 retail locations, will deliver locally for other retailers. For example, a regional chain could sell an item online and have a GoLocal driver pick it up in an unmarked van. The shipment then arrives at the customer’s doorstep within a few hours. The Home Depot has already announced a partnership with Walmart GoLocal.
Competition, profit-taking, and emerging technologies may contribute to rapid and disruptive changes in last-mile package delivery worldwide.
Earlier this year, the company announced that its consumer marketplaces, AliExpress and Tmall, will soon offer free, 72-hour shipping from its facilities in China to almost 190 countries.
Profit is also motivating Walmart to enter the last-mile delivery business. The company is said to be looking to diversify revenue. In August 2021, Walmart announced a white-label, last-mile delivery service called Walmart GoLocal.

Finally, a discussion of last-mile delivery and profit-seeking should also include services such as Doordash, Uber, Postmates, the Front Door Collective, and Walmart’s Spark, which utilizes gig drivers.
Each Alibaba delivery robot can carry approximately 50 packages at a time and cover 60 miles on a single charge. At full capacity, each delivers about 500 packages per day. Image: Alibaba.
With so many companies addressing last-mile delivery, change is almost a given.

Alibaba’s fleet of 10,000 autonomous, electric delivery vehicles has been in service for three years. Each robot can carry approximately 50 packages at a time and cover 60 miles on a single charge. At full capacity, each delivers about 500 packages per day. Collectively, they have made more than 1 million deliveries by September 2021.
FedEx, for example, is raising rates for many of its services by an average of 5.9% in 2022. UPS will likely follow.

If global ecommerce competition and a burgeoning local-carrier industry are not enough to disrupt last-mile delivery, the addition of autonomous delivery vehicles and drones could do it.
Thus, if even a few of these services are widely accepted, ecommerce delivery will change. What seems wild now might be the norm before we know it.
While ecommerce competition is increasing globally, package carriers — established and emerging — are looking for ways to increase profit.

Alibaba, Amazon, Walmart, and dozens of drone and autonomous, electric vehicle companies such as Nuro, Kiwibot, and Starship Technologies are all working to reduce last-mile delivery costs with driving and flying robots.

For online sellers, the “last mile” describes the final leg of a product’s journey to a customer. The last mile is also the most expensive part of that journey, constituting as much as 50% of the total shipping cost.

Consider the trip a package might take from a warehouse to a front porch.
Chinese businesses are among the best at ecommerce package delivery. Companies such as the Alibaba Group have used efficient software integrations, low-cost workforces, and hundreds of logistics partners to ship orders globally.