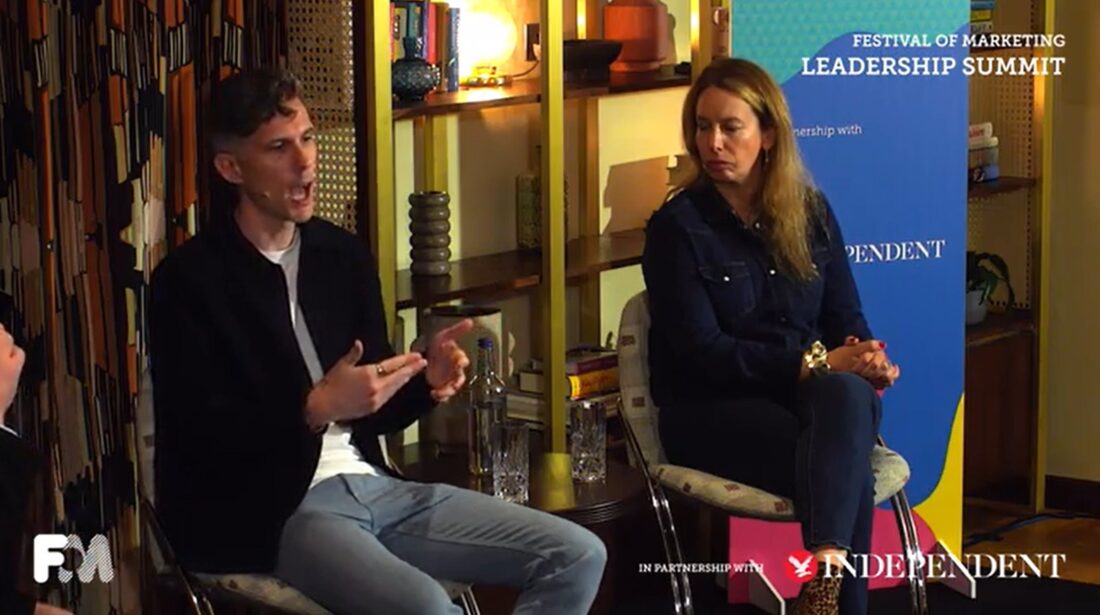 “I remember at the launch party, somebody said, ‘Do you think that Covid’s going to have an impact on this campaign?’, and I said, ‘No way!’” Hinchcliffe recalls, “… and I think it was two days later… we were making the decision to pull it.”

On the topic of KFC’s carefully crafted, bold tone of voice, Parsons asks the pair how the brand is able to gauge what it can feasibly get away with, from a marketing perspective.
MacKenzie, meanwhile, outlines a list of three key questions that she always asks herself about anything from pieces of creative, to any other proposition presented to her.

Behind all of these crucial decisions is a powerhouse of talent, including in-house teams and external agencies. Creativity is a culture KFC has fostered behind the scenes, and its award-winning output reflects that.
One of the most pivotal moments, and toughest decisions, in KFC’s marketing journey to date was dropping the ‘finger lickin’ good’ slogan from its activations during the pandemic.
“The first thing I’d say is, we don’t always get it entirely right,” Hinchcliffe admits, ”So we learn from doing as much as we learn from guidelines and restrictions. Then we’re just really conscious that all of our agency partners and everyone within the organisation has real clarity about who we are, and is empowered to make the right judgements on that.”
“We asked consumers to describe KFC as a person,” Hinchcliffe recalls, “and one of the most visceral images that was conjured through that was an old man… maybe he used to be a musician, and he was cool when he was younger, but now he lives by himself, alone. Although it is genuinely amusing, at the time it was heartbreaking.

“[Secondly]… is a self-awareness,” she concludes, “We’re not an ego-led organisation… We come at it from ‘what is the best thing we can do for team KFC right now, for this brand that we love?’”
Measuring the success of this creativity can often be challenging, particularly when a marketing campaign is first launched. Most of the time, Hinchcliffe says, measurements are based off business outcomes, data from which can only collected and examined over a substantial amount of time. But there are other ways, during the development process, that the team is able to spot potential success.
[embedded content]
You can buy a ticket to catch all the sessions from Festival of Marketing – live and on demand – here.
“First and foremost, it’s about ensuring that people are empowered and able to take risks, because fear is the biggest bucket of water you can pour on creativity… that’s never going to drive the very best outcomes.” Hinchcliffe explains.

“One is our agility,” MacKenzie explains, “We’re a very empowered, devolved business unit, we can literally turn on a dime under pressure, under a crisis situation. You saw that in 2018 with the distribution crisis, you saw that again in 2020/2021 with the global pandemic…

Finally, Parsons asks what key learnings the pandemic has brought about for KFC.
“… What we were able to diagnose off the back of it was that we had a relevance challenge. We actually went into the research believing that we had a communications issue… but it was a much broader challenge than purely comms.”
As a result, the team at KFC needed to transform in more ways than one. Not only did they need to change their advertising and communications strategy, but they also had to recreate the brand from the bottom up. This included “every facet” of the company’s branding, down to the interior design of its restaurants and the products offered on its menu.
“Not everything needs to make us famous…” she explains, “But at the point you’re getting three ticks, you know you’re onto something pretty special.”
In the years since that disappointing revelation, KFC has been working hard on reimagining its image and its consumer proposition. Sometimes this has meant taking risks with its content, like developing a tongue-in-cheek tone of voice, or nearly crossing the NSFW line with campaigns such as the memorable ‘FCK’ bucket ad in the wake of the brand’s 2018 distribution crisis.
Eventually, the choice was made to reintegrate ‘finger lickin’ good’ back into its marketing material this year in a light-hearted, joyful campaign set to Barry White’s You’re The First, My Last, My Everything.
The fast food brand was chosen by a public vote and a panel of senior marketing leaders, who described its marketing strategy as ‘bold and brave’ in the face of the pandemic.

Measuring the effectiveness of creativity

At the Festival of Marketing this week, Marketing Week Editor Russell Parsons sat down with two of KFCs key marketing decision-makers – General Manager for UK&I, Paula MacKenzie and CMO, Jack Hinchcliffe, to discuss the path that led KFC to receive the Brand of the Year award. Together, they discussed the decision to pull the brand’s famous slogan ‘Finger Lickin’ Good’ at the height of the Covid-19 crisis, to the importance of a creative culture in achieving business success.
The journey to reinventing a legacy business like KFC to the once-more iconic brand we see today began several years ago, and well before the pandemic. Hinchcliffe reveals that, five years previously, KFC undertook huge diagnostic research that delved deep into customer perception of the brand. The results were far from comforting, mirroring prior CMO Meghan Farren’s fears that KFC had become the “fading old man” of the fast food sector.
“There’s a huge amount to be said for consistency and commitment. The reason that we have been able to deliver the scale of transformation that we have is because we’ve been incredibly steadfast in our commitment to the strategy. Naturally, every year we refresh and there will be elements that we need to evolve… but on the whole, that diagnosis stays true and [has] lasted us for five years.”
It came just after the brand launched a new campaign in February 2020, designed to put “meaning back into” the slogan, which deliberately showed happy customers licking their fingers while enjoying their meals.
“We obviously put a lot of rigour into our strategy and then we will explore and evaluate some creative territories, and make sure that we’re testing the insights that we’re acting upon,” Hinchcliffe says, “… One of my observations over the last few years has been that actually, a lot of our best work at KFC has come under pressure, when we’ve been acting on really short timeframes… I think that just goes to show that that collaboration and the instinct is just as, if not more important, than the analysis, the rigour and the process.”

Learnings from the pandemic

“[It] was a celebration of our fans and the great lengths that they go to for the brand, and that was just a really natural and instinctive way of us weaving the comeback of ‘it’s finger lickin’ good’ back in.”
Initially, this decision was about acting responsibly in the global climate, but it was also an opportunity to get even more creative. By August, the brand had begun an OOH campaign which pixelated out the slogan from its ads, and asked customers and influencers on social media to come up with fun alternatives. KFC even began borrowing taglines from other brands, “much to the distress of our legal team”, Hinchcliffe jests.
On Monday, KFC was awarded Brand of the Year in the Marketing Week Masters, beating off competition from brands such as Asos and Channel 4.
MacKenzie adds, “The best innovative outcomes… come about by many people touching it… If you take something that is as pure genius as the FCK bucket, that wasn’t just one person… that was so many seriously talented people refining, touching, ideating, building on each other’s ideas.”