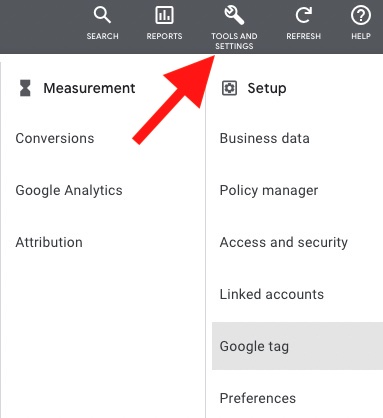 The new Google tag has prompted many questions. Search Engine Land interviewed Google’s ads measurement products director, Christophe Combette, about the changes, asking in part whether the tag syncs with Google Tag Manager. Combette responded that it did, saying sites using GTM require no changes.
The new tag has two primary benefits:
Note, too, that the new tag gathers the same types of data as the previous version. The code is more streamlined and allows users to create events directly in the Ads interface.
The purpose of the update is to future-proof privacy concerns and streamline sitewide tagging. The status of third-party cookies remains unclear as Google has repeatedly extended the Chrome date for removing them. Nonetheless, visitors to websites expect cookie transparency. The new tag aims to quell these concerns while allowing advertisers to collect accurate data.
The new tag resides in “Tools and Settings” in the Google Ads interface.

There are eight settings (some are new):

There you’ll see which destinations associate with your tag. In the example below, the tag integrates with the Google Ads account.

The new tag integrates with your Google Ads account.

Look for more integration info from Google in the coming months.

To set up the new Google tag, click on “Tools and Settings” in the Ads interface.

Advertisers who have the existing global site tag installed do not need to replace it, as the new version will automatically update.

The all-in-one tag that Google teased in May during Marketing Live 2022 is here. The official announcement appears on the company’s Ads & Commerce Blog.

Elements of the legacy Google Analytics setup are present in the new tag, such as data collection and referral exclusions. Google is tightening user privacy and measurement across all destinations.

The tag covers only Ads and Analytics, although additional Google products (called “destinations”) are coming.
Google has not set a deprecation date for the previous tag. That implementation will continue to work, although it’s no longer called “global site tag.” Advertisers can still adjust the settings.
The new tag includes a helpful change history report — who altered the tag and when. For example, the report would show a new domain-referral exclusion, which could explain a drop in traffic.

Again, advertisers using the global site tag require no immediate action. It will automatically update. Still, confirm the settings on the revised version and consider adding Analytics as a destination.