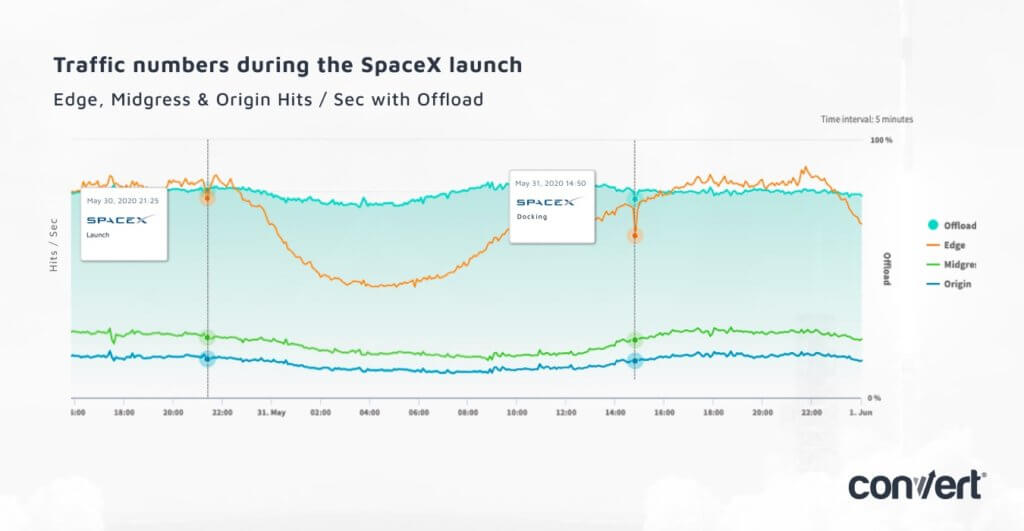 Behnken’s wife, K. Megan McArthur, was the last person “hands on” with the Hubble Space Telescope
Convert experienced this quiet, but significant shift in focus online with a noticeable decrease in traffic to our CDNs during the time of the SpaceX launch and the dock. This graph represents the traffic of the thousands of sites that run our A/B testing tool code snippet (reference graph below).

how insanely COOL IS THIS
You don’t have to understand any of the numbers to see just how much it affected our CDNs’ cumulative traffic between the times of the launch and dock (follow the orange line of the graph). The traffic to our A/B testing customers’ sites dropped on launch to 9.8% (20 minutes) and during docking to the space station it dropped for a full 20% (for just 10 minutes).
The Falcon9 mission follows SpaceX’s first successful crew mission, Demo-2, that launched two NASA astronauts Bob Behnken and Doug Hurley to the International Space Station (ISS) a few days earlier on May 30th. We weren’t the only one who experienced the powerful effects of this moment. Just search for “astronaut”, “SpaceX”, or the hashtag #launchamerica, on Twitter, and it will flood you with cute, encouraging, and supportive tweets like these:

both astronauts launching to the ISS, Bob Behnken and Doug Hurley, are married to astronauts
What do 10.3 million people look like? Imagine the entire population of Portugal online, sitting in front of their computers to witness this launch.

Amid the COVID-19 pandemic, extended lockdown, worldwide protest and civil unrest against police brutality and inequality, another event swooped in and quietly grabbed the attention of many, even if it was only for a few minutes.

We’re still collecting the data, but some of our metrics are saying that peak viewership for the joint NASA-SpaceX launch broadcast across all of our platforms was at least 10.3 million concurrent viewers — the most-watched event we’ve ever tracked.
working on a next generation of fully reusable launch vehicles that will be the most powerful ever built, capable of carrying humans to Mars and other destinations in the solar system.

To date, we haven’t experienced a drop like this before that correlates to a world event with such obvious supporting visual data. With 70% of our customers in the USA it’s not representative for the entire world but a fun fact nevertheless.
As a low stress, high return A/B Testing Tool, our team is always looking at our site traffic and other KPIs for interesting spikes in data and trends.
For the next launches, our team at Convert will monitor our dashboards to see the pattern we experience for this launch and dock repeats, or if we see another interesting analogy.