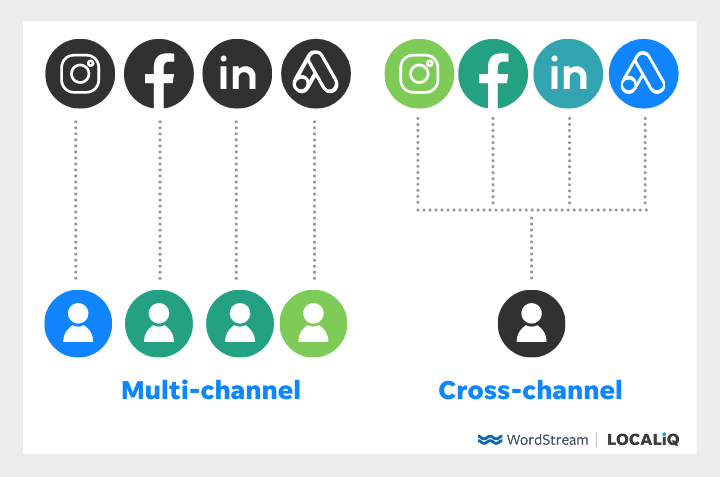 A further breakdown can be found in the Multi-Channel Funnel, Top Conversion Path Reports where you get to see source/medium, campaign, or some other user flow from their first touchpoint through to conversion.

But just because something isn’t perfect doesn’t mean that it’s not imperative to success.
Every platform has its own pixel or tracking functionality, which is great. The not-so-great part is that each platform will nearly always claim more credit than it’s due. This isn’t (only) because they’re trying to show their value, but partially due to a lack of tech to cross-check other platforms.

2. Running the same offers on every channel

It’s fine to say you have a k budget and that you want to run ads on Search, Facebook, and LinkedIn and maybe even give ranges of what you think you should start with. But as the month goes on, it’s in your best interest to pay attention to how each channel is doing compared to its average, as well as how efficient they are adding value compared to each other.
As you can see, all of these mistakes are avoidable. Cross-channel marketing brings home great returns, as long as you put time and thought into your strategy.

email copywriting cheat sheet might. So find out which offers your audience is interested in on each channel to get the best performance out of each.

For this reason, it’s very important to have a third-party source of truth for your cross-channel marketing. The most common and likely easiest option is Google Analytics. Although it’s made by Google, it doesn’t put its ad platform on a higher pedestal than any other when it comes to tracking in the analytics tool.
But I always push back on this. It’s nice to be organized, but in any given month, one channel can drastically under or over perform its historical average. If you’re not adjusting and taking advantage of these trends, you’re severely missing out.

3. Having the same KPIs for each channel

The phrase “cross-channel advertising” can sound intimidating to some folks, but the concept is actually quite simple. While multi-channel marketing uses multiple channels (paid search, organic search, and social media, for example) to reach your audience, cross-channel uses those multiple channels to provide more of a connected experience for your audience. So even as they cross back and forth between channels, they’re still on one cohesive customer journey.

cost-per-conversion goals. If you know leads on Facebook are of lower quality than LinkedIn, you might have a lower acceptable CPA on Facebook. And on the flip side, you might say that LinkedIn leads are so good you’re willing to pay twice the account average for them. The same can be true for ROAS and lifetime value.

Be in tune with the actions your audience wants to take on each channel—not what actions you want them to take—and tailor your campaigns accordingly.

4. Being rigid with budget

Great. Wonderful. I’m happy you’re prepared for this meeting.
So many times clients will come to me and say something like this.
You know from experience that you’re in a different mindset on Instagram than you are on LinkedIn or when you’re searching on Google. Your audience is no different. So if a particular offer is performing well on Google but not on Facebook, it might not be a problem with your Facebook ad copy or creative, but with the offer itself.
Take this LinkedIn ad Litmus is running, for example. They’re offering their State of Email Service Providers report.
And to be clear, no platform will ever do this as it’s not in their best interest.

retargeting audiences. These will differ from platform to platform, but you can mostly cover the same ground.

But you should NOT have a Google headline that says all products are 15% off first purchase while Facebook says it’s 10% off. Or a LinkedIn ad that says you’re rated #1 on G2 Crowd but a Twitter ad that says you’re #2.  (Again, you might be surprised at the number of folks who do this.)

start cross-channel marketing is “but we don’t know what is driving sales.”

“Our budget is ,000 this month. We want to spend k on Facebook, k on Search, k on LinkedIn.”
Make sure you understand not only the immediate performance goals for each channel, but also the total value (if possible) that each channel generates and set KPIs accordingly.
With a cross-channel advertising strategy, each channel needs to have its own goals and KPIs. CTR on Facebook will not be the same as LinkedIn. And neither of those will be close to Twitter.
First of all, this is a false narrative. Unless you really only have one channel of business, you’ll never truly KNOW what’s driving your sales. I’ve said it before and I’ll say it again: If there was an attribution platform that was 100% accurate, that founder would be a household name because they’d be rich.
Although we’d always like all channels to drive direct conversions, that’s just simply not a reality. In most cases, multiple channels are involved in a user’s path to conversion (which is the whole point of cross-channel marketing), so it’s important to identify the role each channel is playing and at which stage. The Assisted Conversions report can show you how many conversions each channel or campaign contributed to, even if they weren’t the last non-direct touch.

all of your channels are tracked consistently in your single source of truth to allow you to make informed decisions about optimizations.

If you can get bottom-funnel conversions like sales or demo requests from Google, but not from Facebook, then accept that. What other conversion actions could you gain benefit from for Facebook? Maybe a lead gen form or a phone call. Maybe you simply want to do audience building and brand awareness. 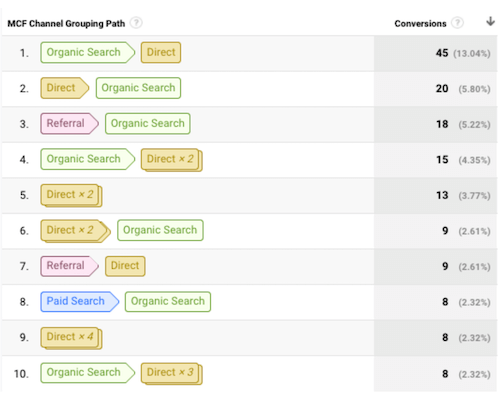 If you’re using retargeting audiences to target previous website visitors who haven’t purchased on one platform, you should be doing that across all of them (as long as performance permits).