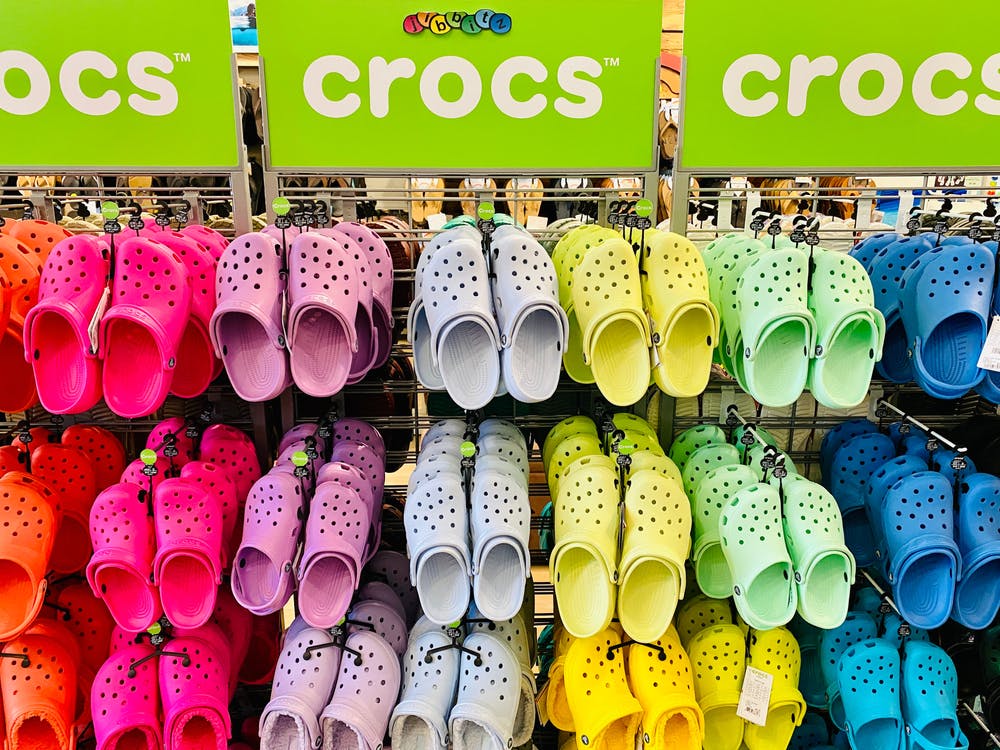 — Crocs Shoes (@Crocs) May 14, 2021
— Justin Bieber (@justinbieber) March 15, 2021
While brick-and-mortar still accounts for a large percentage of the brand’s earnings – mostly through concessions in other retail stores – ecommerce is clearly a continued and growing priority, with Crocs’ digital channels predicted to generate 50% of total revenues by the end of 2026.

♬ original sound – Crocs
Since, Crocs has continued in a similar vein, creating fun, interactive, and innovative content on TikTok and other social platforms – as well as being a pioneer of visual content. Another example of this, as Andrew Rees recently explained, is Crocs becoming the “first footwear brand to market an augmented reality experience on TikTok” with its #GetCrocd challenge.
With people craving comfort more than ever, Crocs has generated marked success during the past 18 months, with revenues surging to 1m in Q4 2020 – a rise of 56.5% from the same period in 2019. Unsurprisingly, with stores shut, ecommerce accounted for the majority of these sales, with online revenue rising 92% in Q4 2020. In its full-year results for 2020, Crocs also stated that “digital sales, which includes sales through company-owned website, third party marketplaces, and e-tailers, grew 50.2% in 2020 to represent 41.5% of revenue versus 31.1% last year with growth in all regions.” At the same time, direct-to-consumer sales increased 39.2% in 2020.

It was through this that Crocs discovered it was going viral on TikTok (even before the brand joined itself), with popular challenges including the ‘Shaving Cream Challenge’ and the ‘Crocs Shoe-Throwing Challenge’ gaining traction on the platform.
Today, we’re starting production on the shoe of the future, powered by a new bio-based material that’s just like the Crocs you’ve always loved.

— Posty (@PostMalone) June 6, 2018
We’ve loved every #ThousandDollarCrocs video you all made. That’s why we’ve randomly selected a lucky fan to send a k gift card to. Check your DMs????

Not long after launching in March 2020, Crocs stated that the tool had triggered an 18% increase in average order value, and a double-digit increase in Jibbitz sales. Commenting on the partnership, CEO Andrew Rees said during the 2021 ICR Conference that “it allows our brand to be relevant to a broad variety of consumers and in a broad variety of purchase occasions, so it’s a really important part of our business.”
Crocs is more about functionality than fashion. And instead of re-working its design to fit trends or find a new audience, Crocs’ recent success stems from its decision to accept its divisive nature, and instead focus on existing love for the brand.
At the same time, it just so happens that fashion has become more about streetwear and sportswear in the past 18 months, with the likes of Yeezy and Air Jordans also maintaining cult popularity in the footwear category. Crocs, with its eye-catching and pop-culture inspired designs, has gained fresh, cult-like status among young consumers in particular.

In the same conversation, Cooley explained how Covid-19 enabled Crocs to ramp up its ‘consumer-first’ approach. After hearing how healthcare workers needed shoes that were “easy to clean, easy to put on and off and comfortable”, for example, it rolled out its ‘Free Pair for Healthcare’ initiative. This saw Crocs give away 860,000 pairs of shoes in 45 days, contributing to growing awareness of the brand (and relevancy of its product) during the pandemic.
One of the main reasons for this is Crocs’ strategic (and surprising) series of collaborations, which range from the rapper Post Malone to luxury brand, Balenciaga. In 2020 and again in March of 2021, Crocs also released limited edition styles in partnership with Justin Bieber and his own fashion label, Drew House. Commenting on the collaboration, Bieber said that Crocs are “comfortable, they’re fashionable, and most importantly it’s fun to bring your own style to how you wear them.”
By setting these intentions, Crocs has cemented itself as a purpose-driven brand that – thanks also to its values relating to self-expression – appeals to younger consumers. What’s more, Crocs has become known as a brand that is able to evolve alongside its audience, which in today’s increasingly fickle retail landscape, seems to be a key component of success.

From the bottom of our hearts, thank you for all you do to keep our communities comfortable in their own shoes.???? #CrocsCares pic.twitter.com/3ddEnJeHjd
In order to capitalise on this momentum, Crocs created its own brand presence on TikTok, launching its own challenge shortly after, #ThousandDollarCrocs, which saw it ask users to post what a pair of ,000 Crocs might look like. In just a week, Crocs generated 100,000 followers, with 45,000 videos created within 36 hours of the challenge’s launch.

Crocs recently pledged to become a net-zero company by 2030, along with the target of a 50% reduction in its carbon footprint per pair of Crocs shoes. To help it achieve this goal, Crocs is to introduce a new bio-based Croslite material into its product line, which it says it can do by “modifying its existing iconic product as opposed to creating a new and separate sustainable line. The result is a shoe that looks, feels and functions exactly like the Crocs consumers know and love, but with less emissions.”

Love them or hate them, Crocs have undoubtedly enjoyed something of a resurgence in the past few years. Seen on the feet of influencers and Oscar-attendees alike – as well as those who simply care more about comfort than style – the footwear brand has recently cemented its success with record earnings.
In its Q2 2021 earnings statement, Crocs announced that it had reached revenues of 0.8 million for the period, which is a 93.3% increase on the same time in 2020. Consequently, Crocs has raised its full-year guidance, with revenue now expected to increase between 60% and 65% in comparison to 2020.
Social media has been integral to Crocs’ marketing activity in recent years, with social listening enabling the brand to create reactive content based on current user trends and conversation.

@crocs
u can tell a lot about a man by the jibbits on his crocs
My second collab with @crocs is dropping around the ???? tomorrow and it comes with socks #JBxCrocs @drewhouse pic.twitter.com/81XWV05KWv

My second collab with @crocs is dropping around the ???? tomorrow and it comes with socks #JBxCrocs @drewhouse pic.twitter.com/81XWV05KWv


Crocs is not the only brand to see ecommerce growth during the pandemic, of course, despite the wider business challenges. However, alongside a spike in consumer demand due to contextual factors (like the need for comfort), Crocs also ramped up digital investment during this time to further build on consumer interest. A prominent example of this is the ‘Crocs Jibbitz Personaliser’ – a digital tool that enables consumers to personalise Crocs with Jibbitz shoe charms.
♬ original sound – Crocs